What Your Favorite Dystopian Heroine Says About You

There’s something about a dark and decimated world ruled by an oppressive regime marked by drudgery, conformity, and misery that brings out the best in some people.

If you’re the type that hates being trapped, tends to see the world for what it is – not what it’s projected to be – and likes to question authority, then you’re already on your way to being a rule-breaking badass.

The question is, who is your dystopian doppelgänger… and what does that say about you?

One Choice is Not Enough

Beatrice “Tris” is like any other 16-year-old -- there’s a lot of peer pressure to conform, but she’s not so sure she fits in with any one group. Unlike her parents, she’s not totally selfless, but neither is she singularly brave, smart, honest, or peaceful. She’s Divergent, which makes her marked for death and a threat to the “perfect” world that is post-Apocalyptic Chicago. She meets her match in her Dauntless instructor, Four, although they do occasionally try to kill each other.

If you choose Tris as your dystopian doppelgänger, then you refuse to be pigeonholed, (although you do look a little bit like Tweety Bird after you chop off your mane into a short shag bob). You’re a lover and a fighter, and above all, you cannot be controlled. 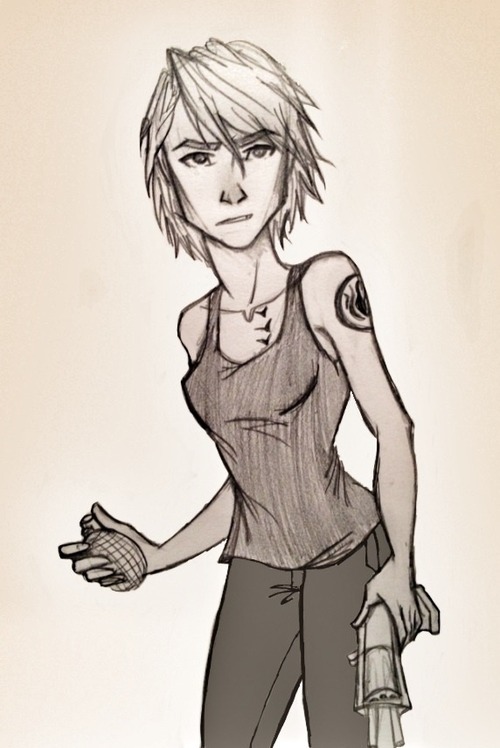 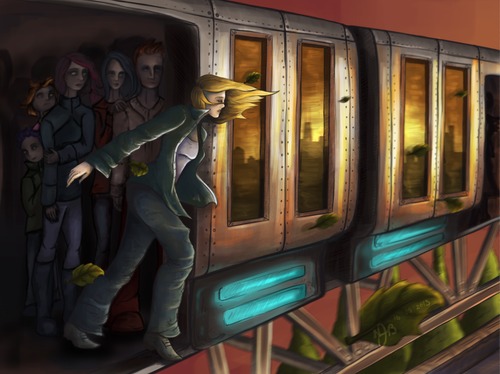 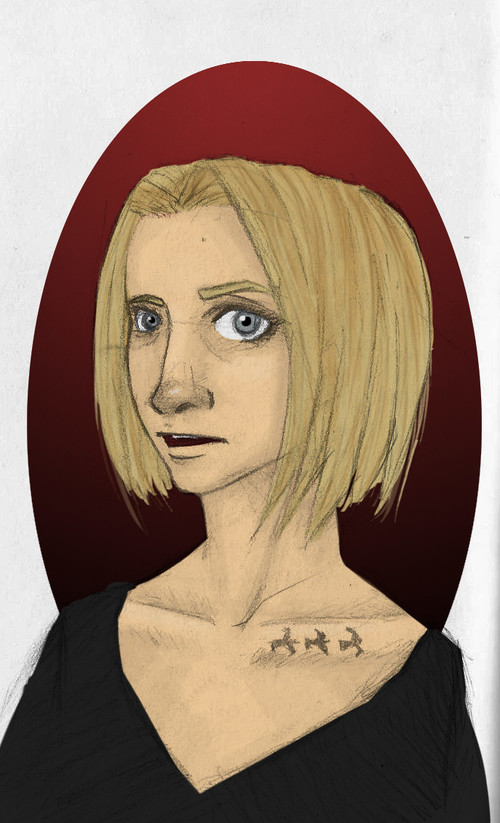 Katniss Everdeen might be the girl on fire, but you’d never know it from her humble, coal-mining District 12 roots. Sure, she’s hot as hell (literally) in Capitol attire, but she also shoots to kill and asks questions of her fellow tributes later. A somewhat unwitting and fully unwilling revolutionary, Katniss trusts few, loves fewer, and despite being a two-time Hunger Games survivor, is not at all a player.

If you’re Katniss-esque, then you’re nearly impossible to read – although if we had to guess, it’d only take a couple of shots of tequila and you’d be polishing off a whole plate of Hot Pockets, tripping over your flaming train, and tumbling down the steps at President Snow’s mansion. Still, you’re loyal and true, and the best damn sister this side of District 13. 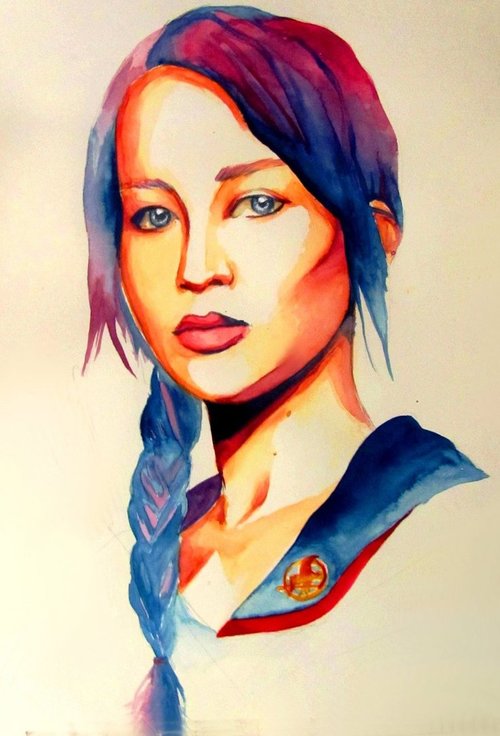 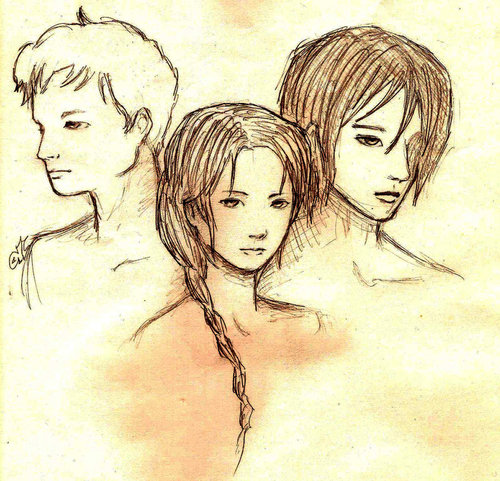 Fifteen-year-old June Iparis is a prodigy with a problem – all the smarts in the world can’t save her when her brother and guardian, Metias, is murdered. The same hyper-intelligence that jets June to the top ranks of the Republic’s military is also her Achilles Heel, as being a cold-blooded killer entails a certain level of ignorance and denial that she just can’t fake. June meets her match in her brother’s presumed killer, Day, and the conflict – and heat – is ON.

If you think of yourself as June Iparis, then you’re the girl from the right side of the tracks with a bad habit of chasing the wrong man… but at least you have man’s best friend (of the four-legged variety) by your side. Still, even though your brain outpaces your brawn, you kick ass with the best of them. 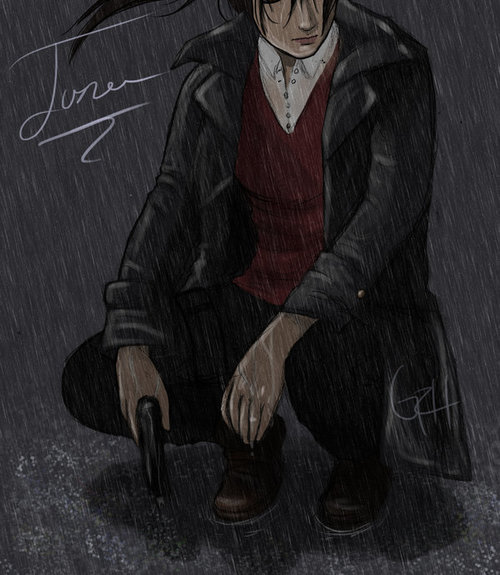 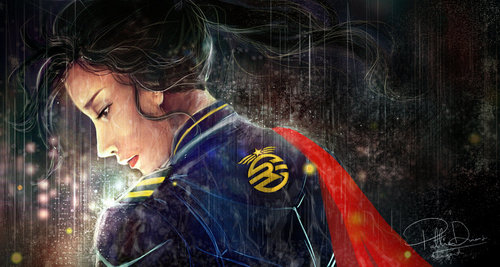 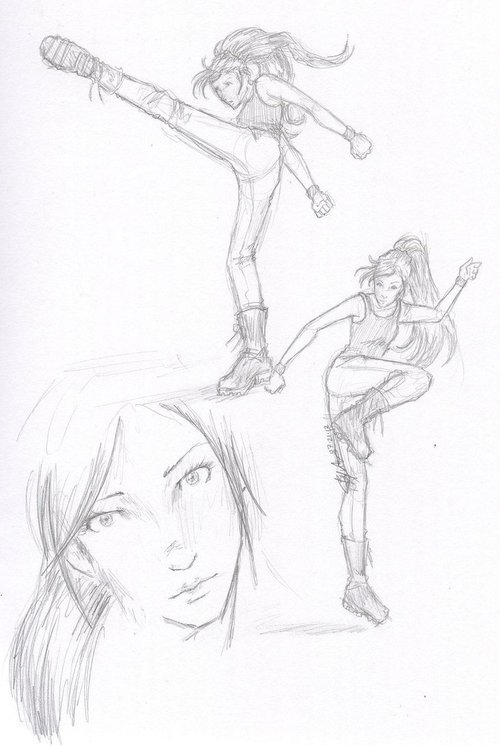 Trinity’s got it all: she’s fearless, ferocious, and a freakin’ genius that hacks her way out of the Matrix and into the heart of “The One” – Neo. She’s as good with manipulating machines as she is as a martial artists, and in the end, her sacrifice leads the way to salvation.

If you share Trinity’s coding, then you’re not afraid to hit escape when the matrix of societal norms tries to make you conform. You’re a badass that doesn’t break a sweat, even when rocking a suit of black latex. And it takes a very special someone to hack through to your heart. 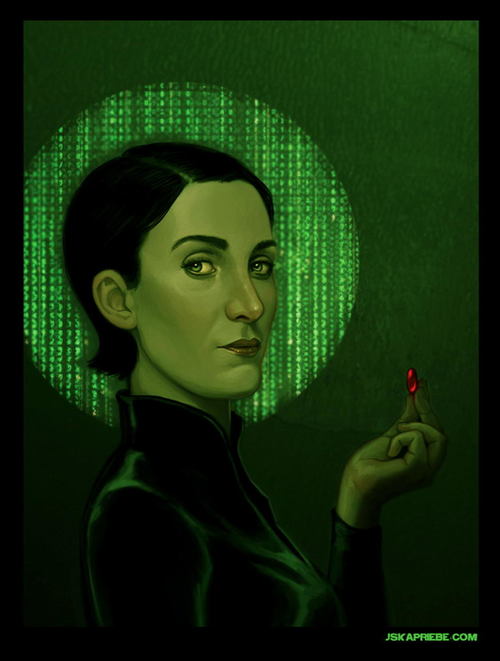 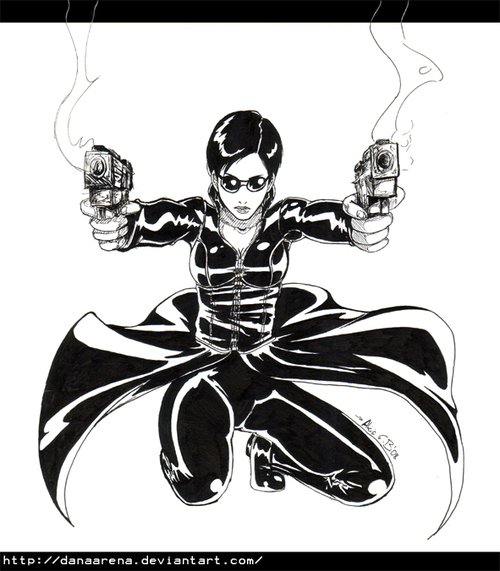 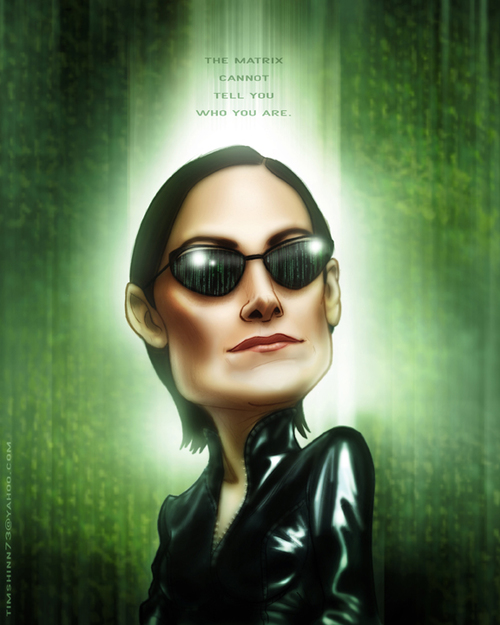 Imagine being raised in space. It might seem like a cool childhood, but in reality, it’s no Zenon: Girl of the 21st Century. You’ve only ever experienced artificial food/air and a single broken rule results in a death sentence. Welcome to the world of the 100. When 100 juvenile delinquents are sent to the “post-apocalyptic” ground, Clarke Griffin, the daughter of the space station’s Doctor is sent with them. Clarke quickly realizes the rules are no longer always black and white, especially when facing the dangerous inhabitants of Earth.

If you resonate deeply with Clarke, you are smart, resourceful and maintain a high emotional intelligence. Big pictures goals are your forte, which makes you a strong leader on the ground. Your heart sometimes controls your brain but you are able to make those tough decisions. We certainly want you on our side during wartime. 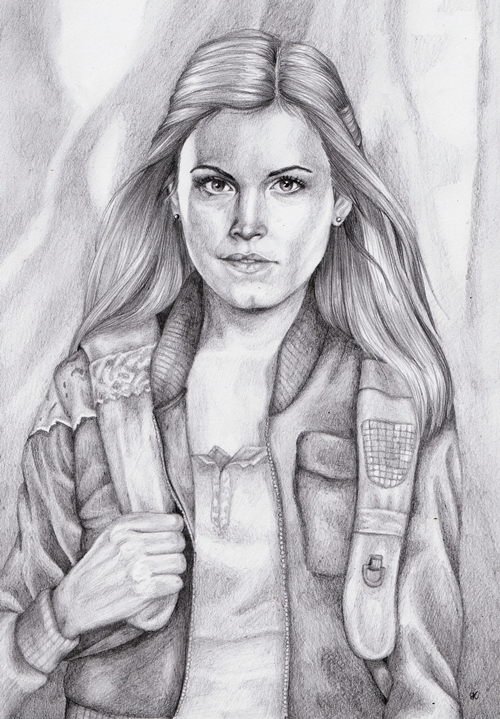 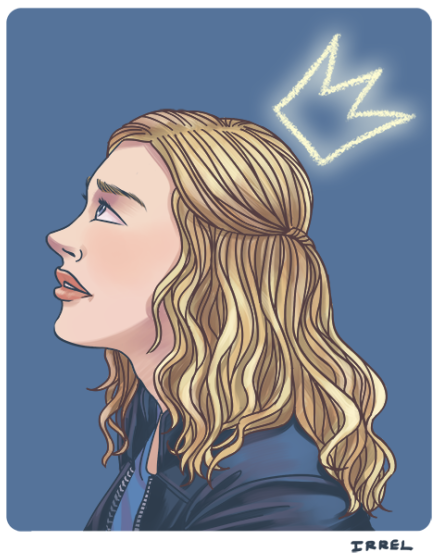 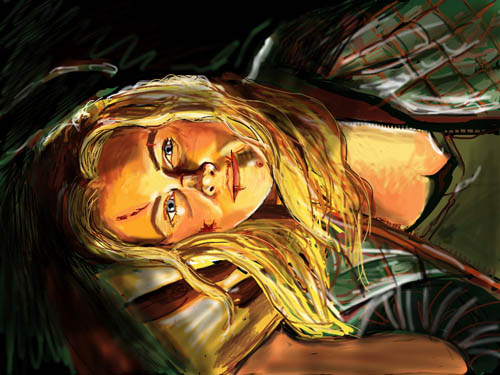 Live By The Sword

While the Zombie Apocalypse-ravaged world of The Walking Dead isn’t technically a dystopia, *SPOILER ALERT*, The Alexandria Safe-Zone, where Michonne and the rest of her gang are currently residing, totally fits the bill. Even getting Michonne to (literally) hang up her katana and put on a “police” (more like mall cop) uniform designed apparently by Wet Seal must be part of some evil mastermind’s plan. Still, when it comes to stealth, cunning, and serious survival skills, the smart money’s always on Michonne to save the day.

If you’re a warrior like Michonne, then you pick your friends… and your pets…with care. You are suspicious of strangers, but hold on to enough humanity so that there’s room for hope, under the right circumstances, of course. Like Michonne, you’re a tough mother – and others should be forewarned that they’d never win if they choose to cross swords with you. 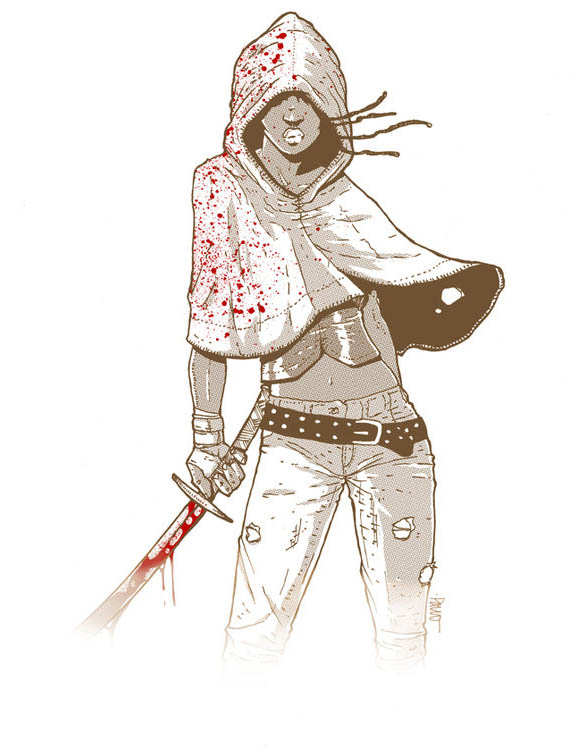 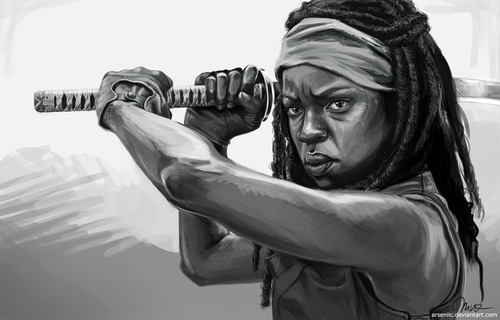 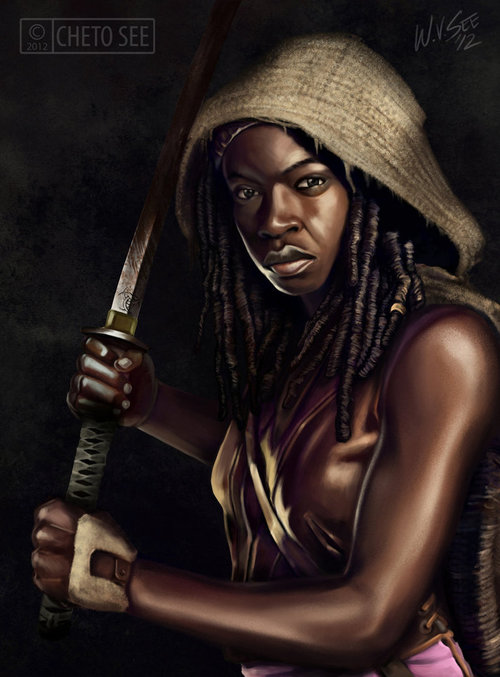 If we left out your favorite dystopian heroine, please let us know. And if you make your own fan art of your dystopian faves, please submit it to our gallery and tweet our editor @brittashipsit.

Tagged in: Divergent Insurgent Legend The 100 The Hunger Games The Matrix Walking Dead YA literature
in Fan Art Finds